It was the night of winter storm Stella and I had been in the house all day (with the exception of going outside to clear my car of the snow) and Rock N Roll Hotel tweeted that Alina Baraz was here and that the sold out show was still on. Honestly, there wasn’t enough snow to cancel it so though it wasn’t a surprise to me that the show was still on I was sort of hoping it got pushed back, just a little bit (I blame my laziness of not wanting to leave the house). Debating if I should take a Lyft and make use of my March discounted pass I opted to drive instead because it was cheaper and I figured I could find free parking (and I did). On a day like this I left the house with a bare face in some boots and sweats.

The doors were set to open at 7pm and I didn’t leave until about 6:15 and managed to arrive there at around 7pm. Parking was a challenge and a bit of a distance considering how far it felt walking in the cold trying not to fall on the sidewalks that had not yet been shoveled full of snow and black ice. The line outside was fairly short thankfully and checking in was a breeze. I’d been to this venue before as the last show that I’d seen here was LEON. For a sold out show it wasn’t so packed, yes I got there after doors but the floor only seemed half full. Deciding whether to stay closer to the back to possibly get a better overall view of the stage or move in closer proved to be the bigger challenge; I opted to move in closer. The DJ (IAMNOBODI) was already up spinning music and the crowd danced and sang (interestingly enough there were quite a few guys there in groups to see the show).

After the DJ a few songs played as we waited and then Alina Baraz came out. She’s really pretty and was giving me an Ariana Grande/Sandy from Grease type vibe. She began song after song from her album Urban Flora and even sang a couple of songs that have yet to be released. At one point something happened with the audio and there were a few technical problems, but she used that time to thank her fans for listening/buying her music and braving the weather to be there. Still waiting she did a song a-cappella and the music got back on track. At a point she said, “This is the last song” and the crowd is like, “What?!” She does the song, thanks the crowd and the band and goes off the stage. By now some people are starting to clear out but the lights are still out and I’m thinking, “Amateurs” so I move closer to the stage. As those of us still there chant, “One more song,” guess what she comes back out.

Not only does she do one more song but does about 3 and says that a special guest is there and she brings out Goldlink. Now I didn’t get a chance to see him when he was at U St Music Hall (and I blogged about him previously on Instagram) so it was a treat to see him there. He sang a Fantasy remix in which he’s featured and she closes the show singing that very song. She seems really sweet and did a good job live (especially with the technical mishap). I am going to have to give Urban Flora a few more spins (but I’m kinda biased I like a lot of the remixes).

Next up is THEY. 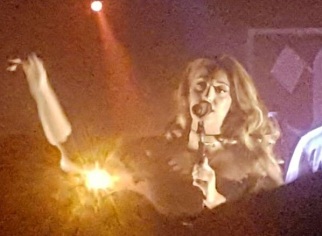 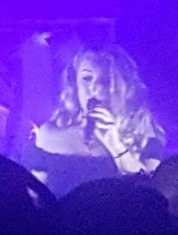 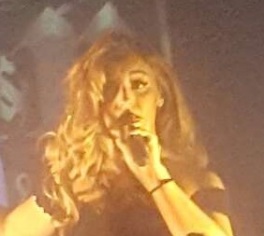