So this is the Ist show of 2018 and tonight we have Eric Bellinger at Songbyrd. The doors opened at 7pm (I think) but I didn’t get there until 8:30pm (just left from working the preview of the DC Auto Show-which I’ll also be running from during the next 2 shows featured here). Parking was a breeze (thank God) and thankfully I found a spot on a neighboring street not too far away (and thank God for not letting me get a ticket earlier). Upon arrival, there was not a long line to check in so I checked in and headed downstairs for the show.

Now I’ve been to Songbyrd before and I’m not sure if I mentioned that it’s a small venue but think like a basement house party and that’s the size/layout we’re working with. Once I moved the curtains back I saw two ladies performing on stage and then glanced in the crowd…it looked packed! Then the smell of mustiness (is that a word?) and something else very distinct that I’d rather not say because it’s so disgusting (makes me want to vomit) but yes fun-ky, so I make my way to the back. Once at the back there seemed to be more space and not so funky breathing air (sigh of relief). I immediately could tell getting pictures would be difficult but I’d do what I could to get some decent shots.

The ladies (sorry I don’t know their names) performed about 3 more songs and then they were done (they must’ve been on for a while according to the people near me). Next a dj comes out (I don’t remember his name either) and plays some old and new school music for us to jam to. Then he says, “Are y’all ready for Jacques” and I’m thinking, “Great, another performer” but the name sounded familiar. I started to wonder and it was confirmed that it’s Jacques from Love and Hip Hop New York (LHHNY). Random thought: So I’m here and they have Jacques from LHHNY (which I just started watching by the way) and I just got a thought…why don’t all the Love and Hip Hop artists do a tour together, like Remy, Cardi, K Michelle, and all the others…why not? It’s not like I know some of Jacques or Mariah Lynn’s music so that would be a good way to get it out there (I mean did Mona (Scott-Young) not think of this)? It was so cute someone asked Jacques about Kiyanne and it seems like they’re still going strong. I must admit that Jacque’s performed a song called, “Shake Something” and introduced it as a strip club anthem and let me tell you it was just that but it even had me moving and what not. So Jacques throws money at this one girl he brought up and other people started reaching for the money lol (if I were closer I would’ve done the same) so he made the 2nd round a competition lol (I can’t). So what did I do record not for the dance but for the song because after the first round I thought, “Dang, I should’ve recorded a clip of the song.”

Random thought: Now I know I don’t work a 9-5 but I did work today and I’m tired and I wish that they would move this along a little more quickly. Makes me somewhat feel as though I’m glad I wasn’t there right when doors opened because I’d really be tired now (sometimes I’m a little impatient). Luckily it didn’t take long for Eric to come out. Now I’m a new fan of his so I don’t know a lot of his music but I do know a few (like 2) songs. I know the song “Mood” that I blogged about (I love that song and he didn’t sing it) and “In My Prime” (which he sang and I also blogged about but forgot about). Anyway, he is really good live which I expected which is why I wanted to come. He sang some songs from different albums along with a few covers. He’s definitely that r&b singer type and has quite a voice. He interacted with the crowd  getting song choices from them and serenaded us the rest of the night. He also made it a point to say which as a songwriter I liked was that when he wrote the album he wanted listeners to be able to play it all the way through with no skips (he wanted it to be that good where every song was your favorite). At the end he did a meet and greet and since I was in no hurry, I sat down until the line went down. He was gracious enough and I was able to get a picture with him and that was the night in a nutshell.


I’ll be back Sat night as there will be another show (2 actually within the next 3 days) that I’ll be seeing. Next up is DC Music Download. 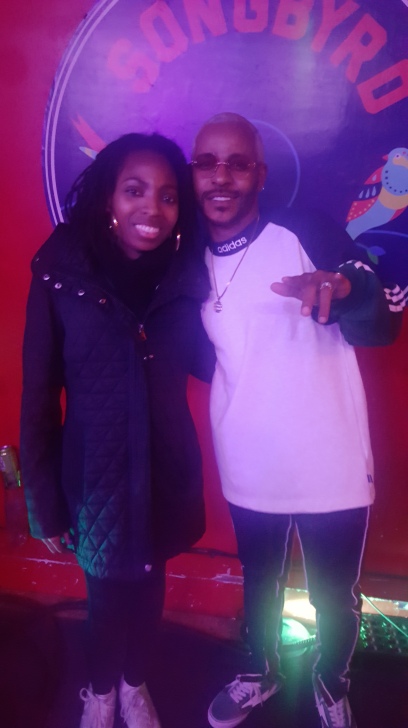