It’s 8:25pm and I’m just arriving at Songbyrd Cafe and it’s surprisingly empty (not really but compared to the other shows there aren’t that many people). Doors opened at 7pm and the show was slated to begin at 8pm. Parking was a bit challenging for a Sunday but I managed. I actually almost walked right past the venue because there was no line outside. Once inside there were maybe 3 people that were in line ahead of me and checking in by will call and ID were a breeze. On IG before I came I saw where someone asked Ciscero what time he’d be performing and he said 8:55pm so I thought, “Bet, I’ll be sure to be there by then.”

Walking in the basement venue downstairs I caught whiff of this unpleasant smell (and if I recall correctly it smelled last time) and there weren’t that many people here (it wasn’t even half full) so I don’t know why it smelled. I made my way to the middle of the floor and almost immediately had to start removing layers because I got so hot. The 1st act Alex Mack came out hype as ever and if you watch Chef Julian on Black & Sexy TV he looks like a younger version of Darryl. Alex reminds me of a retro Logic with his sound and I enjoyed all the songs he performed (so I’m going to have to look him up when I’m doing my new music blogs and feature him). He said that he produces all of his tracks and they were all good so I was really impressed. He asked is to move in closer since we looked like a house party crowd and we did. We swagged and surfed and had a good time. This kid moved across the stage so I had to wait for him to be still to get a good picture-lol but I vibed off of his energy.

Then the act that I came to see Ciscero came out on stage and put on quite the show. Of course he sang my song “Function” as well as a host of others. He got the crowd hype, came out in the audience and danced with the crowd and serenaded a girl. We even did a soul train line in the middle of the floor and it was lit. I knew he was from MD and towards the end of his set he said he’d recently lost his brother and told everyone to cherish all those near and dear to you because you never know when your last day will come (don’t I know it).

At one point the dj plays a song and I’m so into the intro and I know it sounds familiar and then I realize it’s Sza’s song, “The Weekend” which I refuse like due to the principle; I just don’t respect it but of course everyone around me is singing their hearts out. Then Caleborate comes out and as he starts to perform I’m liking what I hear. After hearing a few songs all of which I like I’m standing there wondering, “Why have I never heard of him before, he’s good?” Now when I say good I’m willing to say better than some of these mainstream rappers, in fact all 3 of them were. That didn’t matter now I now knew who they all were and I would be sure to feature them in my upcoming blog.

We vibed and danced and I liked how Caleborate elaborated as to how some songs came to be (I respect that as a songwriter for I’m always interested as to what led to the creation of songs). I continued to vibe and listen, to the melody and to the words; they all had a new fan in me. At the end of the show I stopped by the merch booth and got the Real Person album by Caleborate (because the songs Real Person and Bank Robber really stood out to me amongst others). I got a chance to meet Ciscero and let him know that I heard him in “Function” and was like, “Who is that?” I told him that he was doing an amazing job and that we need more DMV rappers because I know there’s talent here. He agreed and I encouraged him to keep going (and we took a selfie picture).

As I waited in line to speak with Caleborate, the girl that was serenaded earlier complimented me on my locs. I thanked her and told her I liked hers as well (hers were thicker and shorter). I told her how sometimes I wish I got mine thicker and she said she actually wished hers were a little smaller like mine. So we ended up talking about locs (we’ve both had them for a little over 2 years) and found out we had similar interests. We both found out about the show the same way (through Ciscero’s music) and I told her I was a music blogger. She instantly said that she wanted to begin to do that and I told her to just start. I spent a couple of minutes talking to her and telling her how I got started and offered up the advice of the Nike slogan, “Just do it.” She told me I now had a fan and I gave her my card with my blog info on it.

When it came time to meet Caleborate I told him that he did an amazing job and though I had never heard of him before I would not forget him. I told him he’ll be featured on my blog to help garner a bit more awareness and that I really enjoyed the show. I called us the fanny pack gang for he had one as well as I and we took a selfie photo. That was my night and I was alright with it. I left learning more about new artists and had new music with me. This upcoming #newmusictuesday post is gonna be lit so stay tuned and follow me at alesemalese on Instagram.

The next show is Talib Kweli with The Soul Rebels with GZA. 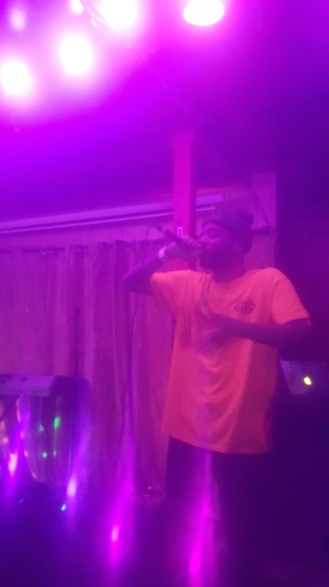 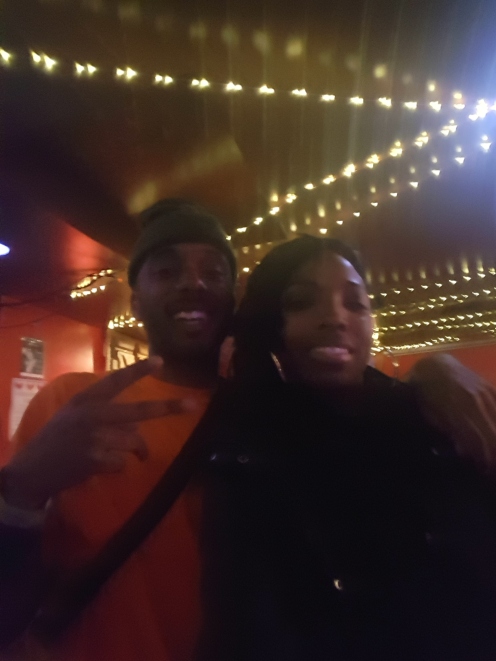 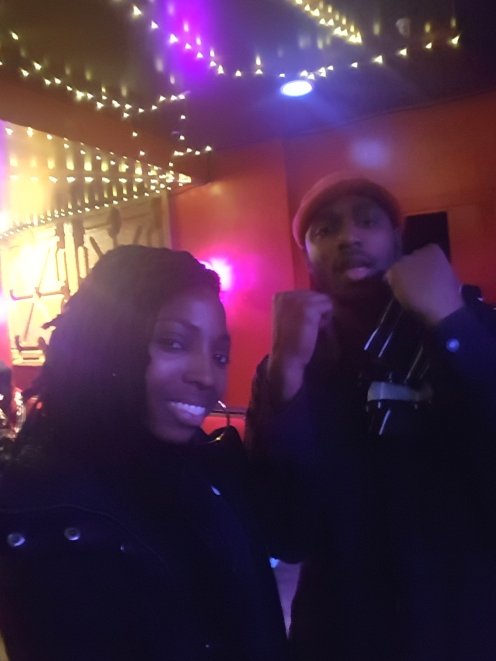