Tonight was VÉRITÉ and Tigertown at the Rock N Roll Hotel. It ended up being a sold out show and doors were slated to open at 7pm with the opening act Tigertown slated to hit the stage at 8pm and VÉRITÉ at 9pm. So I forgot to block off my schedule for one job and ended up working today which cut a bit into the time of the show. I knew that I would miss a bit of the beginning of the show but hoped it wouldn’t be a lot. I got off at 8pm and luckily left at about 8:10pm and lucky for me the venue was only about a 5-7 minute drive away.

Because I’m now familiar with the area surrounding the venue, I already knew my go to for parking. The one thing I didn’t have though was a backup in case that parking was gone (which it was) but thankfully there was still a spot nearby and I circled around and grabbed it. I walked around to the venue hoping it wasn’t too crowded already with it being sold out and what not. As I approached the venue the line was short outside and by now it was 8:25pm and I could hear Tigertown from outside. I was quickly checked in and proceeded inside.

Once inside I was surprised to see that there was still space to move up on the floor. I scoped the floor for my spot and navigated there. I quickly got a picture of Tigertown (my only good picture of them) and enjoyed the music. Then they announced that they had one more song and I thought, “Damn, I missed their set, I wonder if they sang my song Make It Real…oh well, life happens.” (I attempted more pictures but the lighting was not cooperating so I that first good picture is the only one of them. They did say though that they will be upstairs after the show and to come say hi but lets be real I’m jetting to the door when it’s over because I need to post this tonight and get up in the morning for work.

Of course by now the floor is filling in and more people are arriving. The wait (in between) music was good though. Random thought (and I’m sure I’ve said this before) but why do the really tall people stand front and center? But I guess they have every right to, if you want a better spot get there early right; I guess it’s still a little annoying though. Then VÉRITÉ comes out and as I captured pictures of her throughout the night she reminded me a lot of Birdy when I went to see her. The way she sang and how she was dressed gave me such a deja vu moment. Now I’ll admit after about 6 songs I was ready to go because I began yawning constantly and my legs and feet were beginning to hurt however, I see every show till the end. I could barely move but I was going to deal with it.

Random thought: Why do girls constantly flip their hair back? If it’s in the way pin it up or tie it back. I only say that because one of the girls in front kept flipping her hair back and there was only so much space between people and I just thought, “Jesus please don’t let her hair hit me in my face because tonight might be the night;” thankfully it never did. VÉRITÉ was full of energy and from what I can remember didn’t even stop, it was song after song after song until she was done. I waited around for a little bit just to see if the “last song’ was really the last (in this case it was). The lights came on and people began to either head upstairs or out.

Most people went upstairs and since I had never been upstairs and the show was over a little earlier than expected I decided to venture upstairs, plus Tigertown should be up there somewhere. I go upstairs and I see the merchandise table and Tigertown is behind it taking pictures with everyone that asked so I asked the girl behind me to snap a photo with me and Tigertown (see picture below). I told them about how I previously blogged about their music and I bid them farewell. By now I was really tired so since the show was over and I got to meet Tigertown and view the upstairs portion of the venue it was now time to go. I was beginning to feel sleepy and knew that I had to get this write-up in by the end of the night. All in all it was a good time.

PS. The next upcoming show is Thundercat. 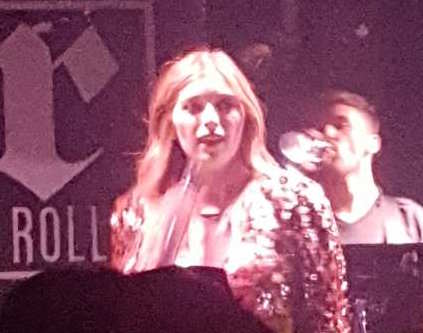